GROUND HAS BEEN BROKEN!

Construction for Thelma Elizabeth Page Richardson Elementary School officially began with the groundbreaking ceremony held Thursday, May 31st.   The ceremony was held indoors at neighboring San Jacinto Elementary School‘s auditorium because of muddy site conditions caused by two days of rain.  That, however, didn’t temper the celebratory spirit of attendees, including elementary school children, school district representatives, a former student of Ms. Thelma Richardson and construction team members from filling the space with the anticipation of welcoming a bright, modern facility into the neighborhood.

The ceremony began with a welcome and Pledge of Allegiance from Nathaniel Hawthorne Elementary School students.  The San Jacinto Elementary School Choir performed for the crowd.  Anecdotes and remembrances were shared by Deardra Hayes-Whigham, senior Executive Director of the South Central Elementary Learning Community, Bernadette Nutall, DISD Trustee – District 9, Shirley Ison-Newsome, Interim Division Executive, Rita Cloman, and Marian Willard, Principal of James Madison High School and former student of Thelma Richardson.  Ed Levine, Executive Director of Construction Services for DISD then described highlights of the new facility.  The symbolic earth-shoveling followed on the auditorium stage, with a long trough of sand substituting for the mud on the construction site. Special guests and the construction team members, as well as, many of the children took the opportunity to lend a hand in breaking ground for Thelma Elizabeth Page Richardson Elementary School.

I recently attended the 2012 Southern Regional Conference for CEFPI. (The Council of Educational Facility Planners).  The day was full, touring the exhibit hall, attending sessions, and reconnecting with colleagues and friends.

While touring the exhibit hall, I met an interesting vendor, Lactette.  Lactette is a product designed to solve the complex problem of inadequate facilities and barriers facing nursing mothers.  This company’s products and designs for lactation rooms are needed in today’s schools, colleges, and universities.  The timing was perfect, as this is the kind of design solution we have been seeking for our Houston Community College Project.

There were many interesting exhibitors on hand as well.  I spoke with Armko about roofing and waterproofing; the Gordian Group about Job Order Contracting (JOC) and how to successfully implement JOC in a school district; and others.

I attended several information sessions.  The one that really spoke to me was about building restoration and adaptive reuse.  While we have significant experience with this, hearing how colleagues and school district personnel implement them was interesting and educational.  Adapting reuse of existing buildings has great potential for getting students out of temporary buildings and into positive permanent learning environments.

In 1914, Woodrow Wilson was president, Babe Ruth made his major league debut, Charlie Chaplin made his film debut, and The San Jacinto Memorial Building in Houston, Texas began its life as the South Side Junior High School. At the time, many students dropped out of school at this age and junior high schools were being introduced as a response. This school was designed in the Classic Renaissance style, complete with Doric columns, carved pediments, and copper spandrels. After the Great Fifth Ward Fire in Houston on February 21, 1912 which consumed a church, a school, industrial plants and homes, it is no surprise that the school’s fireproof construction was touted, including not just concrete and stone, but interior partitions of hollow tile as well. Designed by architects Layton & Smith of Oklahoma City, the 3-story building, housing 800 students its first year, cost $300,000 to build and equip; this would be equivalent to $6,564,000 today. 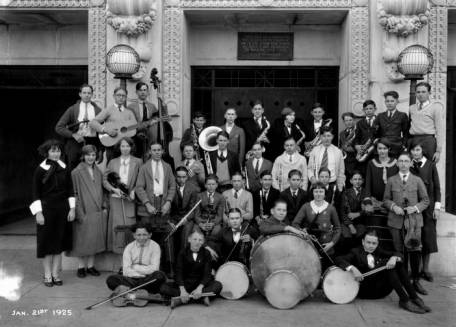 In 1925, after the success of the junior high experiment, three more junior high schools were opened in Houston, and South End Junior High transformed into a Senior High School, adopting the name San Jacinto, in a small part so the athletic teams would not need new uniforms. A fountain in the Conservatory was added in honor of the school principal, Mr. Black.

To meet the ever growing need of the community, a classroom wing was added in full Art Deco style in 1927, which included a third floor cafeteria, followed by another addition in 1939 with a more spacious auditorium and firing range below the stage. Not only did these house a growing high school population, but also night classes given by the Houston Technical Institute. The school remained a functioning high school until 1970 when the Houston Technical Institute took over full ownership of the building. The current owner, Houston Community College, acquired the building in 1988.  At 98 years old the building is in need of a comprehensive renovation and exterior facade restoration.  BRW has been commissioned by HCC to design its rebirth as a facility ready for 21st century education with exterior restored to its original distinction.  Check back soon for details on the renovation / restoration progress.